During the 1950s, Political Instability Continued to Plague French Indo-China Where Dalat School Was Based

Even as school was in session, war raged on as the Viet Minh, the communist army led by Hồ Chí Minh, fought against French occupation of the colony. This conflict ensued for eight years, until independence for Vietnam was declared in 1954 and French Indo-China came to an end.

That year, the country was divided at the 17th parallel — with Hồ Chí Minh establishing the communist Democratic Republic of Vietnam in the north and a non-communist south (where Dalat School was located). Tensions between the north and south began immediately, erupting into civil war.

Dalat School, however, kept growing as new missionaries were appointed and students from other countries in Southeast Asia arrived at Dalat to study.

Dalat School kept growing as new missionaries were appointed and students from other countries in Southeast Asia arrived at Dalat to study. John “Tommy” Tompkins, Dalat English teacher and alumnus from 1968, recalls an enjoyable experience as an elementary student at Dalat in the 1950s: “Playing Capture the Flag and Prisoners’ Base on the lower tennis court and making and sleeping in forts with pine needle walls on weekends made the days fly by. Aunt Betty and Uncle Archie created a home for us all. Bedtime stories and devotions, prayers for Mom and Dad back in Korat, and the Saturday night bath, and an occasional paddling for some misdemeanour,  gave us a secure upbringing.”

Transplanted into the heart of French Indochina shortly after birth, Ron Whipple recalls an oasis of peace. His earliest memories are joyful ones: beautiful surroundings, a love of the culture, people, and food.

The reality of raging war near his home was less vivid, and Whipple was never anxious about it. In fact, peace became a fixture in Whipple’s life — even when he crossed oceans, separated from his family, and transitioned into adulthood without his parents.

“I have always felt it a privilege to have been a missionary kid,” Whipple says. “This was by God’s sovereign grace. There were so many advantages and learning experiences.”

One of those advantages was Whipple’s understanding of and connection to others like him — third-culture children who were growing up outside of their passport culture and facing the unique challenges that come with that upbringing. And it would lead him into a lifelong ministry of serving this special group of people.

Whipple and his twin sister, Gail, were born in Paris, France, in 1937. Their parents were studying French on the way to French Indochina (Laos) as missionaries with the Christian & Missionary Alliance (C&MA). After a few years in Laos, another sister, Ginger, was born just before the family was forced to evacuate in 1941. When the Japanese invaded the area, the Whipples (pictured above) left on the last ship returning to the United States.

In 1947, following World War II, the family returned to Laos (later working in Vietnam), and the Whipple children began their education at Dalat School in Da Lat, French Indochina. 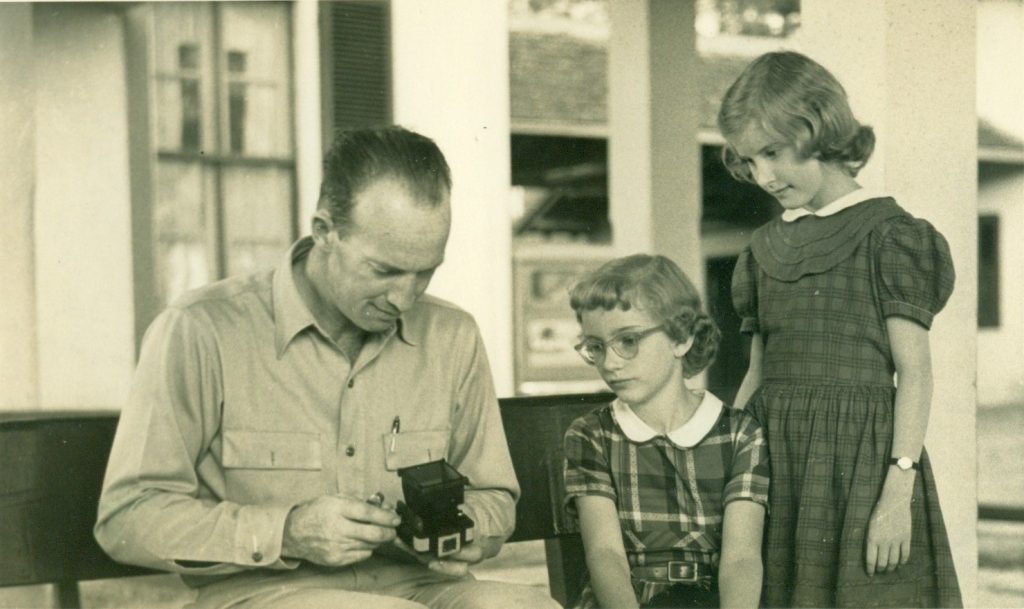 “[At Dalat,] we did not have the luxuries so evident in the U.S. back then or today, but we never felt deprived,” Whipple says. “We felt very much at home.”

Whipple was a middle schooler, and enjoyed his time at Dalat as such. His memories include putting bugs with pincers in other kids’ beds, building a golf course by sinking food cans in the ground and using tennis balls and croquet mallets to play “golf,” and hiking in the hills where students would see wildlife like boars and baboons.

“One learned to be very creative, flexible, and independent,” Whipple says. “Of course the high school students ran the campus, but the middle school students knew how to give them a hard time — and pay the consequences as well!”

In small classes of two or three students, Whipple received lots of individual attention. He grew to love boarding parents “Uncle Archie” and “Aunt Betty” Mitchell, who “poured their lives” into the children at Dalat.

“We respected and loved the Mitchells,” Whipple says. “Archie Mitchell was willing to…invest in a bunch of kids. I really believe this was one of the key reasons why the Lord led me to move into the education of missionary kids when I was seeking the Lord’s direction in my life.”

Archie Mitchell was later kidnapped with two other missionaries by the Viet Cong during the Vietnam War in 1962 and never seen again.

At Dalat, adults were careful not to share news of nearby war and conflict with students, and children were largely unaware of dangers in the area. The goal was give students a “normal” school experience, Whipple says. In some cases, children were safer at the school than at home with their parents in many areas of French Indochina (now Laos and Vietnam).

After five years at Dalat, in 1952 the Whipple family returned to the United States for “furlough.” Once there, Mr. and Mrs. Whipple made the difficult decision to return to Southeast Asia without their children, and all three were enrolled in the boarding program at Hampden DuBose Academy in Zellwood, Fla. The C&MA had special arrangements for children of C&MA missionaries to be enrolled there, and other third-culture kids attended there as well.

While at the academy, and with the Dalat experience as a foundation, Whipple became aware of God’s direction in his life to return to Vietnam to work with missionary kids (MKs). He hoped to return to Dalat School as a teacher. As he began college, health problems altered his goal, and Whipple realized that he could effectively work with MKs living in the U.S.

Whipple’s first job with MKs began while he completed his teaching degree at Stetson University; he became a dorm parent and ran the athletic program at the academy where he had finished high school. For 16 years he continued working at Hampden DuBose, becoming a teacher then an administrator after finishing his master’s degree.

During that time, he married another MK, Mary Jean (Hoffman), who had grown up in Africa (Ron and Mary Jean are pictured). Their daughters Jeannie Marie and Cynthia Lynn were born in 1970 and 1973, respectively. (Whipple now has five grandchildren.)

Although he semi-retired in 2007, Whipple continues to serve as a consultant or on accreditation teams for schools at multiple locations in the U.S. In all, he has served in Christian education for more than 50 years.

“Good memories and experiences were fostered by my time at Dalat,” Whipple says. “God sovereignly used this experience as a preparation for His giving to me a passion and vision for the education of the missionary child, along with others. As a result, the vast majority of my life has been spent in Christian boarding/residential schools. This has been a very special privilege and joy.”